This third season of work, conducted with the agreement of the Sovereign Base Areas Administration and the Republic of Cyprus’ Department of Antiquities, has produced more valuable information about the shoreline port buildings of the Roman and early Byzantine periods - believed to be between 300-600AD.
The latest round of excavation appears to show that the buildings – most likely warehouses and workshops - were struck by an earthquake, probably the same one that devastated the ancient city of Kourion, about 13 kilometres north of Dreamers Bay, in the 360s.
One of the buildings excavated this year contained a number of complete or near-complete amphorae - wine or oil jars - and smaller pots, most of which had been smashed when, it seems, the walls fell on them.
A small number had however remained intact and could be lifted in one piece.
While the work aims to produce “new scholarly information about the history and heritage of Cyprus”, an equally important part of the project’s purpose is to engage with as wide an audience as possible about both the findings and how they are achieved.
Project Director, Professor Simon James, who has been on the ground throughout the project, said: ‘To help people to understand and value the traces of the past which surround us in great historic landscapes like that of Cyprus, it is critically important for archaeologists to explain to the wider public what we are doing and why it matters.
“Many people are also very curious to know how archaeology works, so this year, because we were digging during the Easter school holidays, we decided to organise an Open Day for the community. . 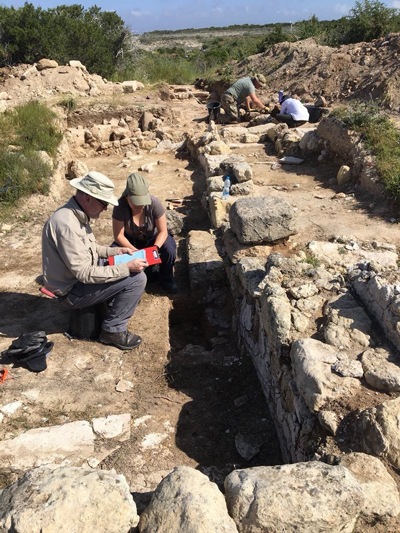 “This provided an opportunity for us to show people what we are doing and also to offer educational archaeological activities for children. These activities were designed by Dr Mireya Gonzalez Rodriguez, both a professional field archaeologist and an experienced schoolteacher. She was assisted by Dr Anna Walas, who has wide experience of presenting archaeology to public visitors.
“They also coached the student archaeologists on the team about how to explain the excavations to visitors and how to run the children’s activities.
“Teaching students about public communication is as important as teaching them how to use a trowel or operate surveying equipment and they made a very good job of the Open Day, which was attended by 150 people of all ages.”
Professor James said he was now looking at a plan to collaborate even more with the Republic of Cyprus, he explained: “We are already working with Bases schools on archaeological and historical topics but we are now discussing with other local stakeholders how over the next couple of years we can collaborate to engage with the wider Cypriot community regarding our own work, and the wider heritage of the Akrotiri Peninsula.”
One of the Leicester University students involved in the dig this year was Grace Cutbill, a second year undergraduate with ambitions to become a schoolteacher.
She said: “It was an incredible opportunity to come to the Dreamers Bay excavation. In addition to the wonderful weather, the archaeology was jaw-dropping and the team were lovely to work with.”